In stock
Catalogue #
276-1707
Be the first to review this product
£1.95 £1.62
Add to Compare
LM3914 Dot/Bar Display Driver Drives LEDs, LCDs or vacuum fluorescents. Bar or dot display mode externally selectable by user.
Skip to the end of the images gallery 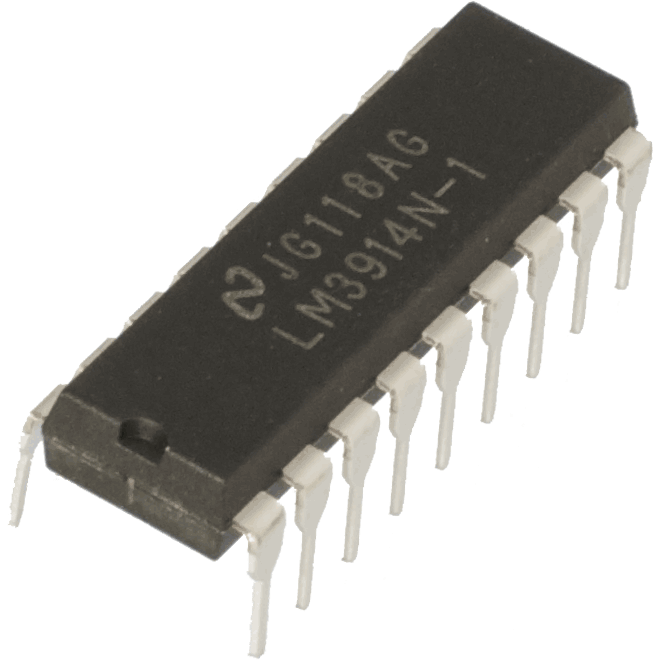 The LM3914 is a monolithic integrated circuit that senses analog voltage levels and drives 10 LEDs, providing a linear analog display. A single pin changes the display from a moving dot to a bar graph. Current drive to the LEDs is regulated and programmable, eliminating the need for resis- tors. This feature is one that allows operation of the whole system from less than 3V.

The LM3914 is relatively low-powered itself, and since any number of LEDs can be powered from about 3V, it is a very efficient display driver. Typical standby supply current (all LEDs OFF) is 1.6mA (2.5mA max). However, any reference loading adds 4 times that current drain to the V+ (pin 3) supply input. For example, an LM3914 with a 1mA reference pin load (1.3k), would supply almost 10mA to every LED while drawing only 10mA from its V+ pin supply. At full-scale, the IC is typically drawing less than 10% of the current supplied to the display.

The display driver does not have built-in hysteresis so that the display does not jump instantly from one LED to the next. Under rapidly changing signal conditions, this cuts down high frequency noise and often an annoying flicker. An “over- lap” is built in so that at no time between segments are all LEDs completely OFF in the dot mode. Generally 1 LED fades in while the other fades out over a mV or more of range (Note 3). The change may be much more rapid be- tween LED No. 10 of one device and LED No. 1 of a second device “chained” to the first.

The LM3914 features individually current regulated LED driver transistors. Further internal circuitry detects when any driver transistor goes into saturation, and prevents other circuitry from drawing excess current. This results in the ability of the LM3914 to drive and regulate LEDs powered from a pulsating DC power source, i.e., largely unfiltered. (Due to possible oscillations at low voltages a nominal by- pass capacitor consisting of a 2.2μF solid tantalum con- nected from the pulsating LED supply to pin 2 of the LM3914 is recommended.) This ability to operate with low or fluctu- ating voltages also allows the display driver to interface with logic circuitry, opto-coupled solid-state relays, and low- current incandescent lamps.