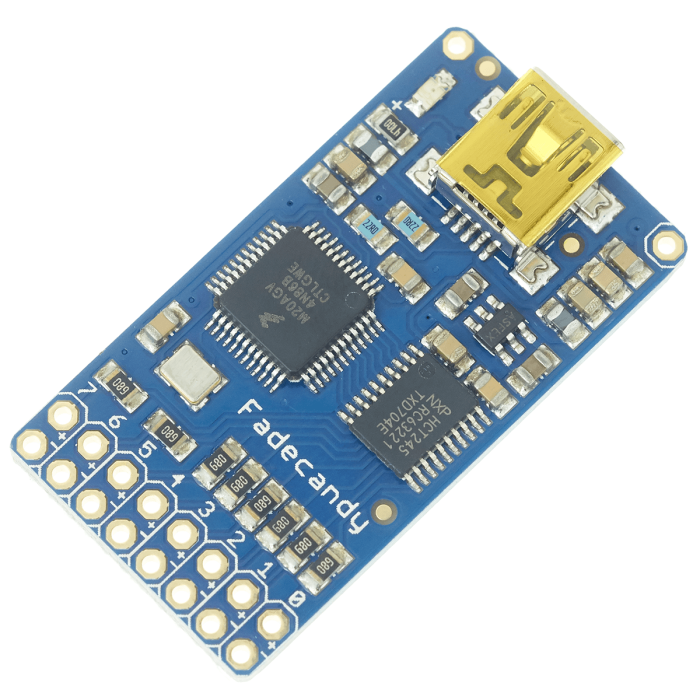 A collaboration between Adafruit & Micah from Scanlime, Adafruit are excited to introduce Fadecandy, a NeoPixel driver with built in dithering, that can be controlled over USB. Fadecandy is not just hardware! It is a kit of both hardware and software parts that make LED art projects easier to build and better-looking so sculptors and makers and multimedia artists can concentrate on beautiful things instead of reinventing the wheel. It's an easy way to get started and an advanced tool for professionals. It's a collection of simple parts that work well together:

Fadecandy is designed to enable art that is subtle, interactive, and playful - exploring the interplay between light, form, and shadow. If you’re tired of seeing project after project with frenetic blinky rainbow fades, you’ll appreciate how easy it is to create expressive lighting!

It's also battle tested! The firmware was originally developed to run the Ardent Mobile Cloud Platform, a Burning Man project which used 2500 LEDs to project ever-changing rolling cloud patterns onto the interior of a translucent plastic sculpture. It used five Fadecandy boards, a single Raspberry Pi, and the effects were written in a mixture of C and Python. The lighting on this project blew people away, and it made me realize just how much potential there is for creative lighting, but it takes significant technical drudgery to get beyond frenetic-rainbow-fade into territory where the lighting can really add to an art piece instead of distracting from it.

Headers are not included.