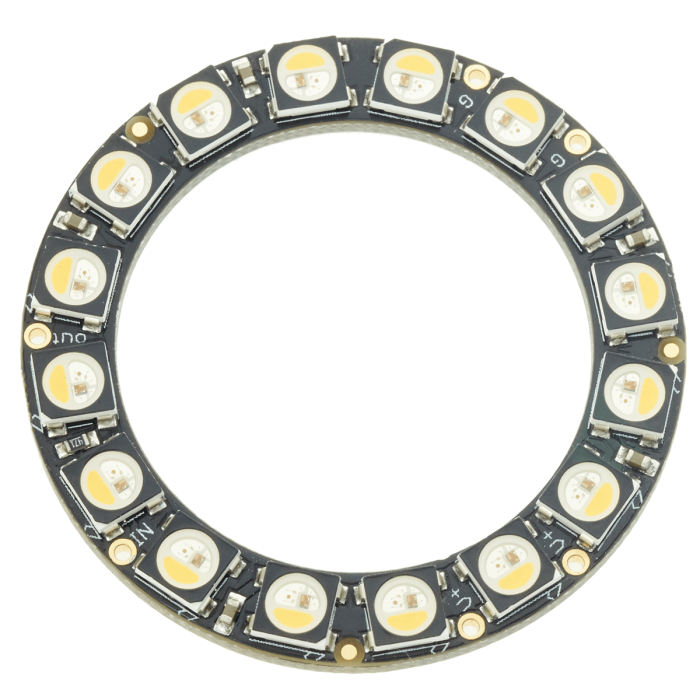 What is better than smart RGB LEDs? Smart RGB+White LEDs! These NeoPixel rings now have 4 LEDs in them (red, green, blue and white) for excellent lighting effects. Round and round and round they go!

This is the 16 LED RGBW NeoPixel Ring in Natural White. We have a ton of other NeoPixel rings in the store to check out!

16 ultra bright smart LED NeoPixels are arranged in a circle with 44.5mm (1.75") outer diameter. The rings are 'chainable' - connect the output pin of one to the input pin of another. Use only one microcontroller pin to control as many as you can chain together! Each LED is addressable as the driver chip is inside the LED. Each one has ~18mA constant current drive so the colour will be very consistent even if the voltage varies, and no external choke resistors are required making the design slim. Power the whole thing with 5VDC and you're ready to rock.

The NeoPixel is 'split', one half is the RGB you know and love, the other half is a white LED with a yellow phosphor. Unlit, it resembles an egg yolk. Lit up these are insanely bright (like ow my eye hurts) and can be controlled with 8-bit PWM per channel (8 x 4 channels = 32-bit color overall). Great for adding lots of colorful + white dots to your project!

NeoPixel LEDs use 800 KHz protocol so specific timing is required. On NeoPixels, the PWM rate is ~400 Hz, which works well but is noticable if the LED is moving. In comparison, DotStars have a 20 KHz PWM rate, so even when moving the LED around, you won't see the pixelation, the blending is very smooth. (we recommend DotStars if you can use them)

NeoPixels are 5050-sized LEDs with an embedded microcontroller inside the LED. You can set the brightness and color of each R/G/B/W with 8-bit PWM precision (so 32-bit color per pixel). The LEDs are controlled by shift-registers and only 1 digital output pin are required to send data down. The PWM is built into each LED-chip so once you set the color you can stop talking to the ring and it will continue to PWM all the LEDs for you.

Adafruit have a tutorial showing wiring, power usage calculations, example code for usage, etc. for NeoPixel on their website, Please check it out! Please note you will need a NeoPixel library with RGBW support which is not always available. If you try to control these with a plain 'RGB' NeoPixel library, you'll get very weird results. The Adafruit NeoPixel library does support RGBW but if you're using something else, just be aware that it might require some hacking.

The detailed Adafruit NeoPixel Uberguide has everything you need to use NeoPixels in any shape and size. Including ready-to-go library & example code for the Arduino UNO/Duemilanove/Diecimila, Flora/Micro/Leonardo, Trinket/Gemma, Arduino Due & Arduino Mega/ADK (all versions).

Comes as a single ring with 16 individually addressable RGBW LEDs assembled and tested.