Out of stock
Catalogue #
980-1895
Be the first to review this product
£9.95 £8.29
Notify me when this product is in stock
Add to Compare
Skip to the end of the images gallery 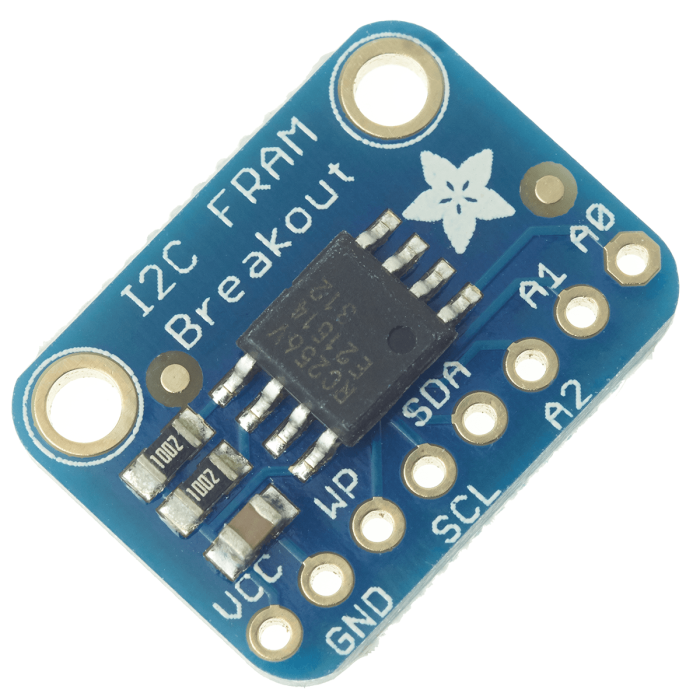 FRAM, or Ferroelectric Ram, is the coolest new data storage method that all the fashion magazines are talking about. Oh wait, no that's quilted handbags. But FRAM is pretty damn cool too! It's similar to Dynamic random-access memory, only with a ferroelectric layer instead of a dielectric layer. This gives it stable handling (the bytes you write are non-volatile) with dynamic responsiveness (you can write them very fast!)

Now, with this I2C FRAM breakout board you can add some FRAM storage to your next DIY project. FRAM allows for a lower power usage and a faster write performance. It's excellent for low-power or inconsistent-power datalogging or data buffering where you want to stream data fast while also keeping the data when there's no power. Unlike Flash or EEPROM there's no pages to worry about. Each byte can be read/written 10,000,000,000,000 times so you don't have to worry too much about wear leveling.

This particular FRAM chip has 256 Kbits (32 KBytes) of storage, interfaces using I2C, and can run at up to 1MHz I2C rates. Each byte can be read and written instantaneously (like SRAM) but will keep the memory for 95 years at room temperature.

Adafruit picked the largest chip that has I2C and is also 5V compliant for this board. You can use this chip with either 3V or 5V power and logic. It comes in a breadboard-friendly breakout and a spare stick of 0.1" male header for soldering on.