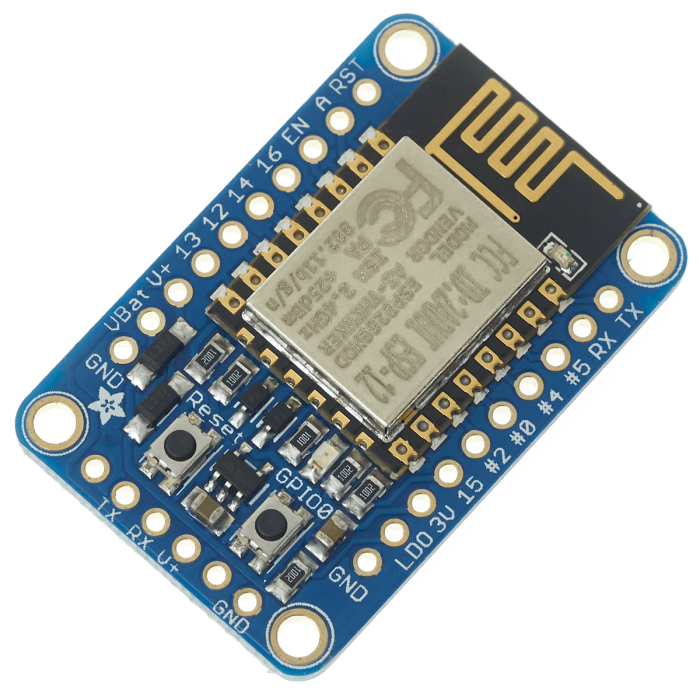 Add Internet to your next project with this bite-sized WiFi microcontroller. The ESP8266 processor from Espressif is an 80 MHz microcontroller with a full WiFi front-end (both as client and access point) and TCP/IP stack with DNS support as well. While this chip has been very popular, its also been very difficult to use. Most of the low cost modules are not breadboard friendly, don't have an onboard 500mA 3.3V regulator or level shifting, and aren't CE or FCC emitter certified....UNTIL NOW!

The Adafruit HUZZAH ESP8266 breakout is designed to make working with this chip super easy and a lot of fun. Adafruit took a certified module with an onboard antenna, and plenty of pins, and soldered it onto a custom designed breakout PCB. Adafruit added in:

Two parallel, breadboard-friendly breakouts on either side give you access to:

One breakout at the end has an "FTDI" pinout so you can plug in an FTDI or console cable to upload software and read/write debugging information via the UART. When you're done with your coding, remove the cable, and this little module can be embeded into your project box.

Each module comes pre-loaded with NodeMCU's Lua interpreter (NodeMCU 0.9.5 build 20150318 / Lua 5.1.4 to be specific), you can run commands, and 'save' Lua programs directly to the module's Flash using a USB-Serial converter cable. But, if you'd like, you can skip Lua and go direct to using the Arduino IDE. Once you download the ESP8266 core, you can treat it just like a microcontroller+WiFi board, no other processors needed!

Each order comes with one assembled and tested HUZZAH ESP8266 breakout board, and a stick of 0.1" header that you can solder on and plug the breakout into a breadboard. A soldering iron and solder are required for that, and aren't included. Solderless breadboard also not included.