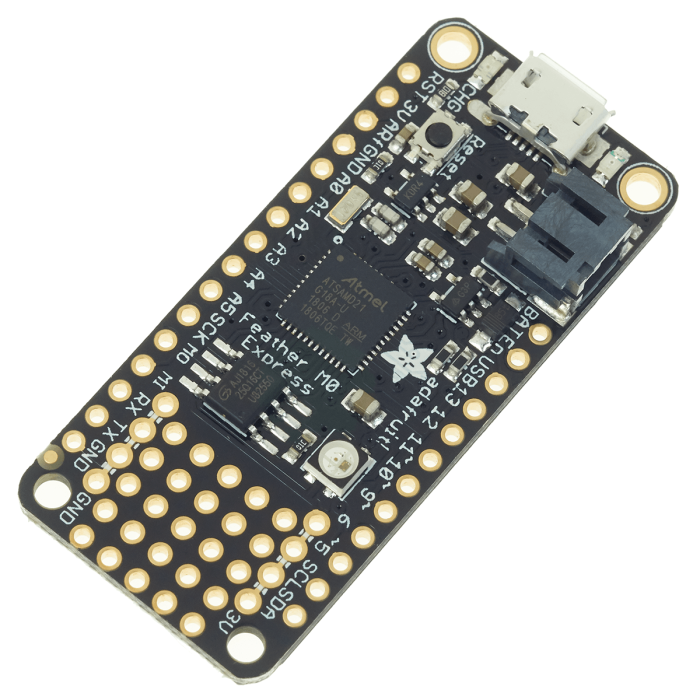 We love all our Feathers equally, but this Feather is very special. It's the first Feather that is specifically designed for use with CircuitPython! CircuitPython is a beginner-oriented flavor of MicroPython - and as the name hints at, its a small but full-featured version of the popular Python programming language specifically for use with circuitry and electronics.

Please note, CircuitPython does not come preloaded. See the full guide provided by Adafruit for instructions on installing it.

That doesn't mean you cant also use it with Arduino IDE! At the Feather M0's heart is an ATSAMD21G18 ARM Cortex M0+ processor, clocked at 48 MHz and using 3.3V logic, the same one used in the new Arduino Zero. This chip has a whopping 256K of FLASH (8x more than the Atmega328 or 32u4) and 32K of RAM (16x as much)! This chip comes with built in USB so it has USB-to-Serial program & debug capability built in with no need for an FTDI-like chip.

The Feather M0 Express uses the extra space left over to add a Mini NeoPixel, 2 MB SPI Flash storage and a little prototyping space. You can use the SPI Flash storage like a very tiny hard drive. When used in CircuitPython, the 2 MB flash acts as storage for all your scripts, libraries and files. When used in Arduino, you can read/write files to it, like a little datalogger or SD card, and then with the helper program, access the files over USB.

Easy reprogramming: the Feather M0 comes pre-loaded with the UF2 bootloader, which looks like a USB storage key. Simply drag firmware on to program, no special tools or drivers needed! It can be used to load up CircuitPython, PXT MakeCode or Arduino IDE (it is bossa-compatible)

Comes fully assembled and tested, with the UF2 USB bootloader. We also toss in some header so you can solder it in and plug into a solderless breadboard.